Today I talk about Flash Gordon for the Outer Space on Film blogathon today. I am paying tribute to Flash Gordon which is one of my favorite serials all time to watch and re-watch often as its inspired many movies including star wars. I really adore classic Science Fiction serials and classic movies of that genre that all shine so brightly on the screen.

Flash Gordon is often called one of the cheesiest shows all time by so many people that often dismiss the amazing levels of depth beyond this series. It is cheesy at times the series but the series is embracing pulp Science Fiction tales that shaped the genre of Science Fiction. Flash Gordon serials were based upon the Flash Gordon comic strip which was created to compete with the already established Buck Rogers adventure strip which happens to be another serial that inspired star wars. Flash Gordon is directly inspired by John Carter of Mars which was what they wanted originally to make the strip based upon but ended up with Flash Gordon. The Flash Gordon comic strip has been translated into a wide variety of media, including motion pictures, television and animated series as today I am talking about the serials it’s such a joy to talk the classic serial flash gordon today.

Flash Gordon begins with the strange planet Mongo hurtling towards Earth on a collision course. People across the world, from London to darkest Africa, are panicking as their seemingly certain doom draws near. One of the doomed Earthlings, polo player and all-around athlete Flash Gordon as it begins its story(plot intro form web)

Flash Gordon is probably the most popular and certainly the best known of all movie serials all time. Flash Gordon has wonderful sets and performances and creatures and unabashedly emotional moments to make it one of the most enduring serials of all time.

The cinematography of Flash Gordon further augments the serial’s atmosphere with some strikingly stylish camera angles that capture the action as one example is  flash’s fight with the “monkey-men” in the first chapter. The cinematography of this serial really captures such marvelous moments of action upon the screen.  I would say some moments it captures is so much fun to watch unfold on the screen and wonderfully captured on the screen by Frederick Stephani whom crafted out remarkable moments upon the screen.

One should not forget that The director Stephani and the more experienced Basil Dickey, George Plympton, and Ella O’Neill all really deserves credit for the wonderful things in the serials dialogue. Its cheesy at times some of the lines for our time today but you can always enjoy them if taking in context of time period.

Many serials divide the villainy between a brain and villains and action heavy it features a heroic team that one could say the main hero that does most of the action of the series which i feel unfolds upon the screen with such marvelous action upon the screen.

Jean Rogers’ Dale Arden is a pleasure to watch; her stunning beauty has never been seen to better advantage as her acting is also excellent, particularly in her reactions to the bizarre terrors of Mongo; critics have always seemed compelled to make silly comments about her propensity to scream and faint in times of danger or emotional stress but she is marvelous to watch upon the screen. Priscilla Lawson is also very good as Ming’s daughter that gives out such a marvelous job upon the screen. Richard Alexander has one of the most unusual roles of his career as Prince Barin, the rightful heir to the throne of Mongo who allies with Flash against the usurping Ming handles his archetype so well. He is simply marvelous in his performances on the screen. I would say its acting is Flash Gordon’s strongest suit along with its action and other wonderful elements to make this classic serial really come to life upon the screen. 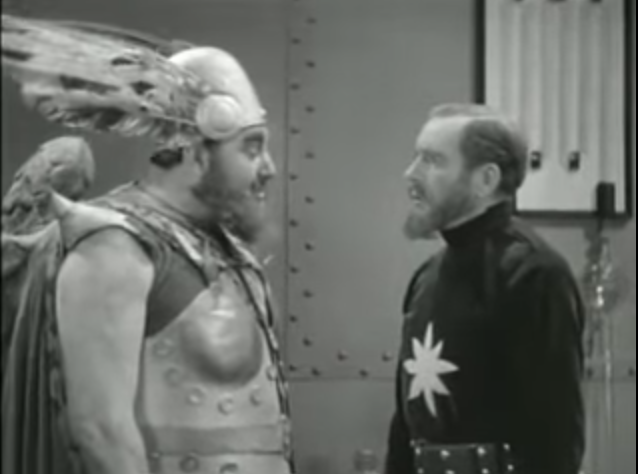