The Curse of the Cat People- A HAUNTING FABLE FOR CHRISTMAS

Today I talk about  The Curse of the Cat People. In the early 1940’s rko was suffering a big failure following citizen Kane and other movies leaving the studio in ruins. it turned to its low budget b pictures . Val Lewton was the man put in charge of producing these flims with titles given to him by the studio so came up with movies ideas as he found ways to make these movies into horror classics as he started with Cat People as today I review The Curse of the Cat People which is a perfect holiday horror classic which i review today. The Curse of the Cat People review

The Curse of the Cat People remains among the strangest Hollywood sequels ever made. Following Cat People, RKO’s 1942 horror masterwork of shadow and atmosphere that also helped delay the studio’s financial ruin, the sequel resolves to occupy another genre entirely. I would call it one of my favorite movies all time as its story is quite lovely. Director Robert Wise, winner of Oscars for the musicals West Side Story and The Sound of Music among several other classic films directs this classic gem that is so strange and different form other horror classics. 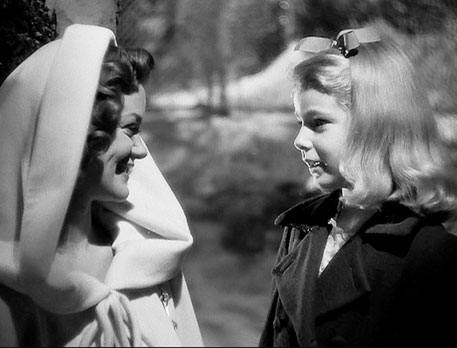 The Curse of the Cat People certainly is full of terror and Lewton’s signature dark, foreboding atmosphere and noirish cinematography. Instead, the film evokes the dark fairy tales of Guillermo Del Toro and the deep understanding of childhood fears as it feels like a fairy-tale.

The film is set in Tarrytown, also known as Sleepy Hollow, and while it was shot in California, the realistic sets, cinematography, and atmosphere perfectly evoke the dreamy, haunted mood of small-town upstate New York. The authentic feel of the film is no doubt due to the fact that Lewton based much of the details of Amy’s world on his own childhood, growing up near Tarrytown. Like Amy, he was fascinated and terrified of the legend of the Headless Horseman. The classic folktale of Sleepy Hollow is discovered by Amy during the film.

Ann Carter is astounding in the role of Amy, taking another otherworldly turn after playing Veronica Lake’s enchantress daughter in I Married a Witch as she gives out such a wonderful performance in her role. Simone Simon who literally plays the role of a good fairy/fairy princess as Irena She’s an angelic presence that, again, could be perceived as evil because she is so ethereal. It also has wonderful acting by its entire cast.

By the nature of the movie’s story you are really in a fairy-tale that feels dreamlike and echoes many other childhood fairy-tale classics with its even Gothic touches that feel right out of a fairy-tale. I used adore to read old fairy-tales as a boy as had book collecting them this movie really captures that feeling of those classic tales form grim tales to the legends of folk tales that evoke such a dreamlike fairy-tale feeling.

The film tracks a period of time from late autumn through Christmas and ends on a snowy Twelfth Night. Each sequence is steeped in rich seasonal atmosphere, and the hauntingly beautiful Christmas sequences make The Curse of the Cat People a perfect pick for any spooky flavored holiday season. In one of the film’s most famous scenes, Amy’s family has invited carolers into their home on Christmas Eve. While the merry group gathers around the piano to sing “Shepherds Shake off Your Drowsy Sleep,” Amy remains separated from the group. She hears another soft, distant singing. Gazing out the window, she sees Irena standing in the snowy garden, under a tree frosted with ice. She is singing a different carol — “Il Est Né, Le Divin Enfant” — just for Amy. It’s one of the most gorgeous, magical scenes ever put to film.

The Curse of the Cat People is rather a fairy tale in a way it’s very much a movie that feels more dreamlike like the classic fairy-tale classics form The magical tone of the movie is reminiscent of Rene Clair or similar fantastic directors of the era that feels so much more fun to watch unfold on the screen as it captures the childhood feel so great. The Curse of the Cat People is hardly a horror story at all as its more a Gothic fairy-tale which really makes it one of a kind for movies of its time. This is a lovely, haunting film that you will simply enjoy to watch anytime.