Buster Keaton the Art of the Gags.

I am a very huge fan of Buster Keaton. I would say i adore his work so much. He is one of the biggest joys for me to watch his work on screen as he simply is a wonderful act to watch on screen. I would say he ranks among the best of comedy legends all time to my eyes. Buster kreaton is simply one of the true founders of visual comedy and modern comedy in so many ways so to talk him is a real joy now for The Fifth Annual Buster Keaton Blogathon today as today  i talk about some of his best gags he did on the screen which i frankly hope enjoy my talk and read other works form this wonderful event.

Buster Keaton the Art of the Gags.

He had been starting to tell the stories trough his visual story-telling.  Every single fall is a chance for comedy gold. Never fake a gag is buster’s one rule.

Buster’s world is flat, and he goes by a rule  if the camera can’t see it, neither can the character. So he creates jokes that make sense visually, but not logically. Characters can move up, down, right, or left toward the camera, or away from the camera  creating humor in geometry. Or the camera is positioned back far enough so we can see the shape of the gag.

Keaton adopted his famous deadpan look whilst involved in the stage show having learned that he could obtain a greater laugh if he didn’t show any emotion whilst hurtling through the air! Nobody liked a laughing child being thrown at them.

He wanted his audience to trust the gag was real, so for this reason he would never make a cut. They would either get the gag in one shot or it would be thrown out. For this, he is remembered not just for his skill, but also his integrity. And just as they say in the video: “No advancement in technology can mimic this.” It’s true. Buster Keaton gives us the real thing for any gag. The house falling on  Buster Keaton  was amazing because apparently weighed about 2 tons and for the window measurements, to quote Keaton, “I had a clearance of two inches on each shoulder, and the top missed my head by two inches and the bottom my heels by two inches. We mark that ground out and drive big nails where my two heels are going to be. Now we had to make sure that we were getting our foreground and background wind effect, but that no current ever hit the front of that building when it started to fall, because if the wind warps her she’s not going to fall where we want her, and I’m standing right out front. But it’s a one-take scene and we got it that way. You don’t do those things twice yet as this comedy moment often was said to be a moment many future comics would look at in awe. 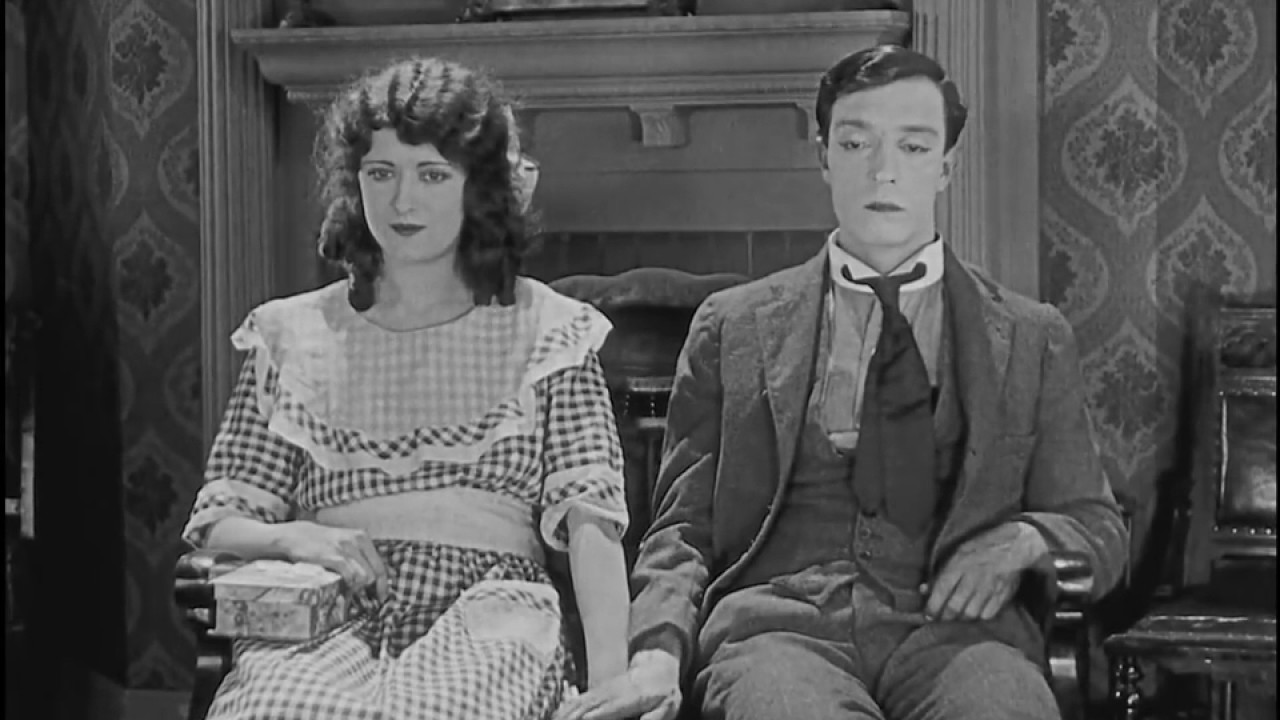 The scene from Buster Keaton’s classic “Sherlock Jr” that resulted in Keaton breaking his neck, though he wouldn’t realize until years later when a routine medical revealed a callous had grown over the decade old fracture as he did this wonderful stunt that showcased his magical power of being buster.

The gag itself is straightforward or so it seems to be that way.  Buster comes into Arbuckle’s store to buy a bucket of molasses,putting his coin in the bucket. Arbuckle fills up the bucket without seeing the money, and then, aggravated about having to fish out the coin, gets revenge by pouring molasses into Buster’s hat. The hat then gets stuck on Buster’s head. Further complications ensue when Buster’s shoe also gets stuck to the floor with the molasses its one of his older gags that was one of my favorite types of his gags.

Why i adore buster kreaton so much

I simply adore Buster Keaton because he simply could make any simple gag and many complex gags all work together as I went through his shorts i found that he simply is marvelous with his timing that he manages make any gag truly stand out by his timing as he makes simple gags and many ladder gags all stand out. He is also a wonder with mechanical gags and he adored trains and other modes of transport as he would often use them in his gags and shorts.  He did westerns a few times that managed poke fun at the western in fun ways before western spoofs were a thing. It is truly remarkable managed do so many wonderful gags and stunts without help of anyone. I would say that some of my biggest belly laughs came from viewing Buster’s short films.   I would say he ranks among the best of comedy legends all time to my eyes. Buster kreaton is simply one of the true founders of visual comedy and modern comedy that i adore so much.

8 thoughts on “Buster Keaton the Art of the Gags.”